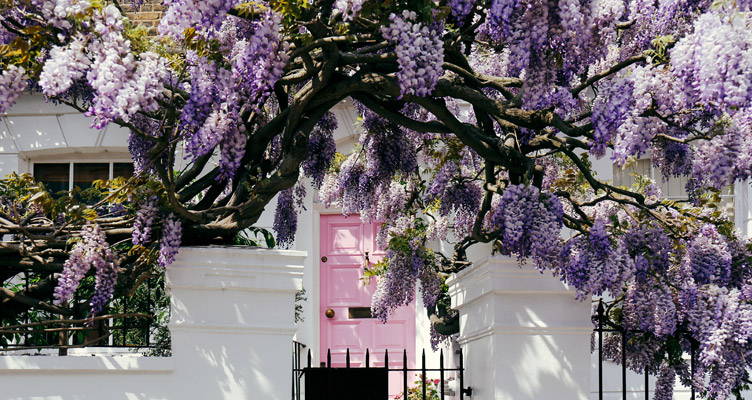 It's that time of the year again. Wisterias are shining in gardens, arches, railings and onto the walls in the streets. Wisteria is the generic and common name for several species of woody climbing plants from the pea family (Fabaceae). Wisteria comprises around ten different species.

Some wisteria varieties can reach a height of ten metres, although all stop at around four metres. As many gardens have limited space, wisterias need to be trained and their growth should be controlled with annual pruning. However, the wisteria is not a very demanding plant. All it needs is some sunshine, humus-rich soil and sufficient moisture.

Wisteria is characterized mainly by its distinctive foliage and flowers. From May through June the plant is adorned with pendulous flower clusters with an average length of 25 centimetres. The flowers of the Chinese wisteria may be either blue or white. These lively flowers combined with the elongated leaves give the plant its stunning appearance.

This shrub does not need much pruning. The growth of the leader needs to be curtailed slightly during the first two years, but after that all you need to do is keep the shrub in shape, tie down the side branches and encourage flower development. You can encourage the flower spurs to develop by simply cutting the side branches back to two or three flower buds from the leader. The flower buds are thick and rounded whereas the leaf buds are long and pointed, so it is easy to spot the difference, although this should be pointed out in order to avoid confusion.
Versatile but needs training.

As already mentioned, the wisteria is an ideal climbing shrub for growing against a fence or railing. However, it is not self-clinging. Therefore it's important to train the plant, otherwise it will hang down. Tie the plant to a robust construction, as a fully grown wisteria can be fairly heavy.

Wisteria can also be used to brighten up a dull wall. For this you need to drive strong hooks into the wall in order to attach the branches. Another creative possibility is to use wisteria to adorn a carport. As long as the branches are tied down properly, this can turn an uninteresting structure into a beautiful feature.

Check out our collection Ramblers