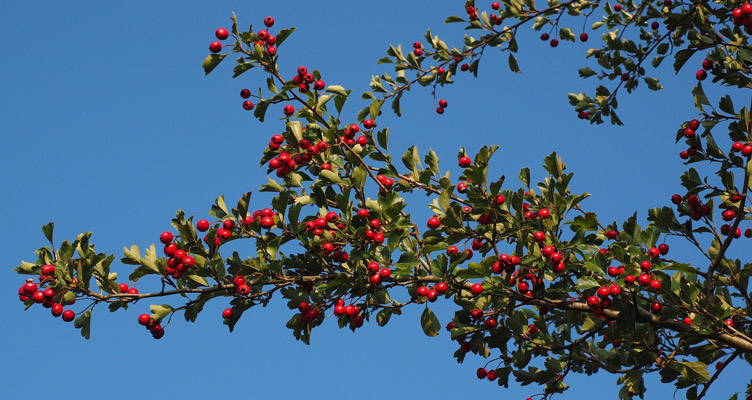 Three different varieties of hawthorn are discussed here: Crataegus Persimilis, which originates from China, Crataegus Monogyna and Crataegus Laevigata. The two latter varieties can be pruned without any problem.

The Crataegus Persimilis, which originates from China, is generally planted as an ornamental tree in Europe. This hawthorn is sometimes known as Crataegus x Prunifolia. The Crataegus Monogyna and the Crataegus Laevigata are also popular. These two varieties do not mind pruning.

If the hawthorn is planted as a solitary feature and you want it to develop as a tree, make sure you raise the crown in summer. This is done by removing the lowermost side branches.

This is a good time to shape and neaten the crown of the hawthorn. The branches can become straggly and entangled, and thinning out the crown to allow in more light may help. Never prune in freezing weather. The single-styled hawthorn, Crataegus Monogyna, also withstands pruning well. Of course, how you prune depends on the ultimate shape you want to achieve, as the single-styled hawthorn can be grown as a hedge, a shrub or a tree.

The single-styled hawthorn can be planted as a hedge. This will not be a neat hedge with clean lines but a virtually impenetrable boundary with a natural appearance. If you have a hawthorn hedge that needs trimming, June is the best time to do this. If you want to clip a solitary hawthorn, this can be done in June too.

If you want to tidy up your hawthorn hedge before winter sets in, this can be done in September, although you should realize that this will affect the spring flowering.

If you have planted a hawthorn as a shrub in your garden, you should know that the Crataegus has a rather straggly and dishevelled growing habit. It is therefore a good idea to thin out the crown from time to time in autumn (October) or in winter (February).A garden hedge does not necessarily have to be neat and tidy with clean lines. The hawthorn is an ideal subject for a more random design. However, this does make pruning slightly more difficult. With every branch you remove, you have to consider the effect this will create. An alternative for less experienced gardeners could be to give the shrub a thorough trimming every two years.

Remember that you must never prune in freezing weather.