The history of the tulip 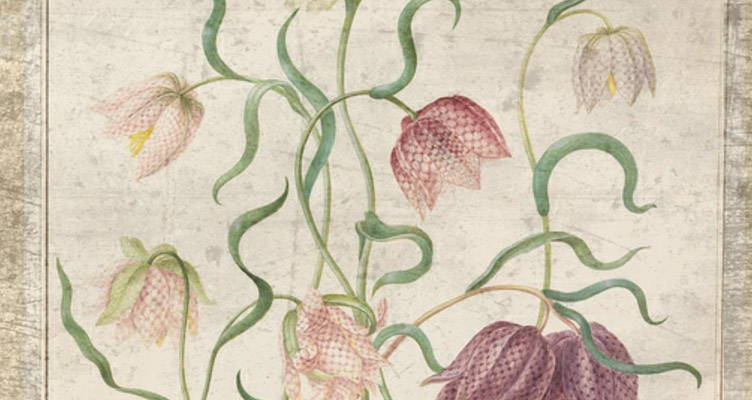 The Netherlands is of course famous for clogs, windmills and tulips. The history of the Dutch tulip goes all the way back to the 16th century. But did you know that Tulips originated in Turkey, not Holland? The Laleh (Turkish for tulip) grows wild there. Tulipa is the Latin word for tulip, and that derived from Tulipan, which means ‘turban’. The shape of the tulip flower was perceived to bear the resemblance of a turban. Tulips conquered the hearts of the Ottoman Empire and it was also fashionable to wear tulips on turbans. The tulip was brought to Holland, via Great Britain, around 1578.

The old walls of Constantinople, during the Tulip Festival in Istanbul, Turky.

Constantinople, now called Istanbul, was considered one of the most beautiful cities in the world in the 16th century. It was a centre for trade, travel, culture and politics. The Sultans of the Ottoman Empire adored tulips and palace gardens were royally decorated with them. The gardens in Istanbul were greatly admired from near and afar. As a consequence, tulips became very popular, and a veritable symbol of power and wealth. The Century of the Tulip in Turkey reached its height at the start of the 18th century. Every spring, at full moon,Sultan Ahmed III arranged an extravagant, hugely expensive tulip festival in the palace gardens. Unfortunately, the festivals proved fatal to Sultan Ahmed and he was assassinated by dissatisfied conspirators who felt he had spent too much of the public’s gold on them.

Persia strongly protected trade and cultivation of tulips and it was forbidden to trade in the bulbs, outside of the capital. Offenders were severely punished and all existing and newly created varieties were meticulously registered. In the oldest known book on tulips, there are an amazing 1,588 names registered and listed of cultivated tulips.

Sultan Ahmed III started the tradition of presenting important guests to his palace, the gift of tulip bulbs. One of his important guests was the Flemish nobleman Ogier de Busbecq. Busbecq was envoy to the Austrian Hapsburgs at the court of Suleyman the Great and he was totally gripped by ‘tulip fever’. He wrote enthusiastically about the beauty of the tulip.

The nobleman Ogier de Busbecq sent his learned friend Carolus Clusius (Charles de l'Écluse) some tulip bulbs. Clusius was a French scholar and botanist in the gardens of the court of the Austrian Emperor. He was so enamoured with the tulip bulbs that the tulips were given place of honour in the gardens.

Clusius was appointed professor at the University of Leiden (NL) and brought the tulip bulbs to Holland. 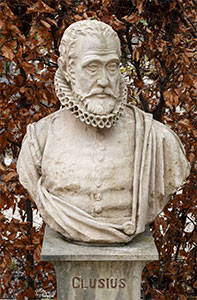 He performed all sorts of experiments on them and grew the bulbs on in the university’s herb gardens - Hortus Botanicus in Leiden. Mostly due to the sandy soil in the Dutch coastal areas, cultivating the tulip bulbs was very successful. The very first 'Rembrandt' tulips had flamed petals and were actually painted by Rembrandt van Rijn as well as other famous painters of the Dutch school at that time. Clusius was meticulous in researching the ‘flames’ and stripes on these tulips. It was the 19th century before it was discovered that the flames and stripes are actually the result of a virus.

Clusius had plans to sell the exotic bulbs but the price he asked was prohibitive and no-one would buy them. A number of enterprising ‘fellows’ crept into his garden one night and stole the lot. These stolen bulbs were actually the starting point for the cultivation of tulips in The Netherlands. However, it was Clusius who created the basis for research on Dutch bulb cultivation and hybridisation. Clusius was also responsible for introducing other bulbs like Ranunculus, iris, anemone and daffodil from countries around the Mediterranean Sea.

In the year 1623, a famous English apothecary, writer of herb lore and botanist, John Parkinson, was already writing about cultivated varieties of tulip. He divided the bulbs into three groups for flowering purposes – early, middle and late. This division of the bulbs is still utilised today. Great Britain still plays a very big role in the cultivation and indeed registration of new varieties of tulip.

Tulips became really popular over large swathes of Europe in a very short time. It was of course mainly the rich who could afford to buy them. Tulip bulb prices continued to rise and in 1634 a veritable ‘Tulip Fever’ erupted. Trade in bulbs during the Tulip Fever period was pure speculation and the very first economic bubble in Holland. Tulips were traded at this time at such high prices that one bulb was equal in value to the cost of a merchant’s home on the canals of Amsterdam! The fever subsided but not before 3 years had passed. Tulip Fever was over in 1637. Prices dropped dramatically and many merchants were declared bankrupt. Fortunes were wiped out and many people became unemployed. The government took over in April of 1637 and declared each and every one of the speculative contracts null and void.

Special vases were made specifically for displaying tulips in the 17th century. These tulip vases came in various shapes but all had a number of openings (necks), where an individual tulip stem could be placed. These vases were mostly made in Delft (NL), decorated in ‘Delft Blue’ or in China and painted in the original Chinese porcelain patterns. A tulip vase was mainly decorative and as tulips were indeed so expensive, the flowers were sold singly. 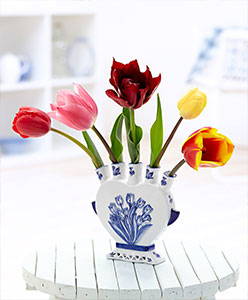 Check out our collection Tulips