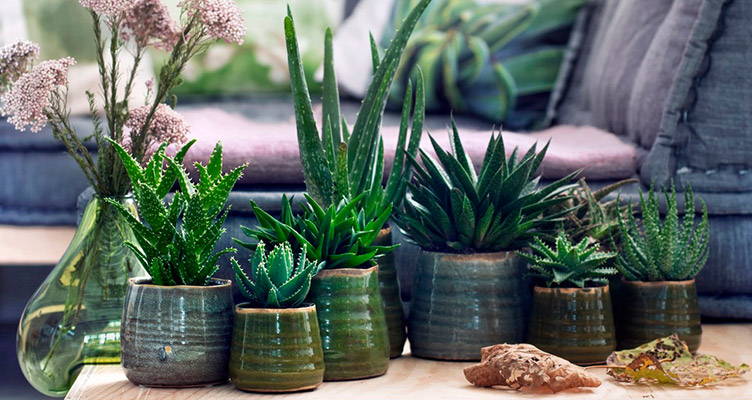 An aloe as an indoor plant is really quite something! A very strong, powerful looking plant that is easily grown and easy to keep. The Aloe is the perfect bit of home greenery, especially if you are not particularly green-fingered. Give August’s Houseplant of the Month a nice, big sturdy pot to allow it to stand out. Grouped with other succulents, an aloe makes an attractive ‘statement’ plant in your home. There’s a current trend for decorative cacti and succulents such as the Agave, Echeveria, Crassula, Haworthia and Senecio, plus the indispensable Aloe.

Aloe is easy to care for – it is after all a succulent. This plant stores moisture in the thick rosettes of leaf which helps it to get through periods of drought. Water your Aloe fortnightly. You can let it dry out between waterings. It does like a nice light and sunny spot and it can go outdoors to the patio or decking in the summer too. Feed monthly during the growing period. An Aloe can flower after a short dormant period in the winter. Water and feed only sparingly over that period. The flower will develop as the days gets longer and then you can start properly watering and feeding it again.

The Aloe vera is a succulent classified under Asphodelaceae and has grown on the Arabian peninsula for millions of years. The name Aloe comes from the Arabic for glossy and bitter which refers to the cooling gel-like sap of the leaves. The vera part of the name roughly translated means ‘the one and only’. There are 300 different varieties of Aloe. As a desert plant, aloe needs to be able to survive the extreme conditions so the plant has developed 75 different elements to help it through. If a leaf is damaged in any way, the ‘wound’ will immediately heal via clotting sap in order to keep as much moisture in the leaf as possible – rather like blood in humans. The active ingredient of Aloe sap has proved to be just as healing to us too. Ancient Egyptians called the aloe ‘the immortal plant’. It was first described in Europe in papers from 1655. Today Aloe grows wild around the Mediterranean, Indonesia, Mexico and the Caribbean.

Aloe vera is the most popular variety of Aloe. The serrated edged, greenish blue leaves grow at the base of the plant. There is also the Aloe arborescens (meaning, tree-like) which is somewhat larger with curling leaves. Aloe humilis (meaning, low-growing) has a compact rosette of leaves covered with white ‘teeth). Then there are also A. aristata ‘Cosmo’ (green) A. squarrosa (star-shaped rosettes) and A. ‘Pink Blush’ (with pinkish markings on the rosettes). 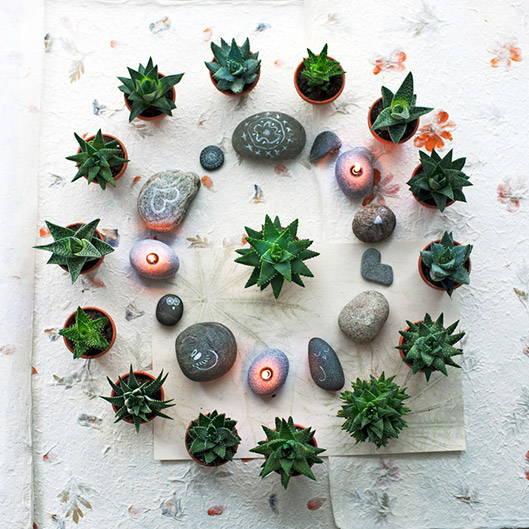