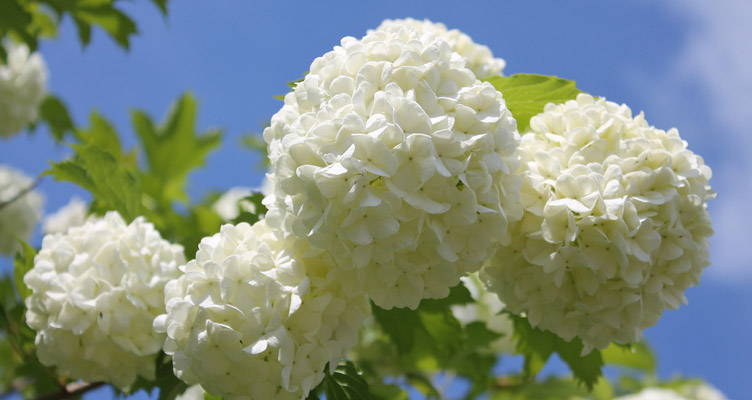 There are several different snowball varieties. The Latin name of this magnificent genus is Viburnum. Some examples of this fabulous plant are listed below:

* Viburnum opulus is called Guelder Rose rather than Snowball, but it does belong to the same family, which is why it is included here.

The rejuvenation of the Guelder rose should also preferably be done in March, using the same technique as described below for the other snowball varieties.

Rejuvenation pruning in May

After flowering in May, the two snowball varieties Viburnum x carlcephalum and Viburnum carlesi can be given a rejuvenation pruning.

With rejuvenation pruning, the old bush is replaced completely over a period of three to five years. This must be done methodically. You should determine in advance which branches are to be removed in which year. It is important to start pruning from the heart of the plant rather than removing the outermost branches first. Select branches divided evenly over the entire plant and cut these down to a height of about 30-40 cm, preferably just above an outward facing bud. If you want to rejuvenate the snowball over a period of three years, select one third of the branches for removal in the first year. In the second year, remove half of the branches remaining from the previous year, again pruning the innermost branches first. The remaining original branches, the outermost branches, can then be removed in the third year.

Pruning in June or July

As the Japanese snowball flowers later in the year, it must be pruned at a later stage. If you want to rejuvenate your Japanese snowball, this can be done in exactly the same way as described above for the other snowballs.