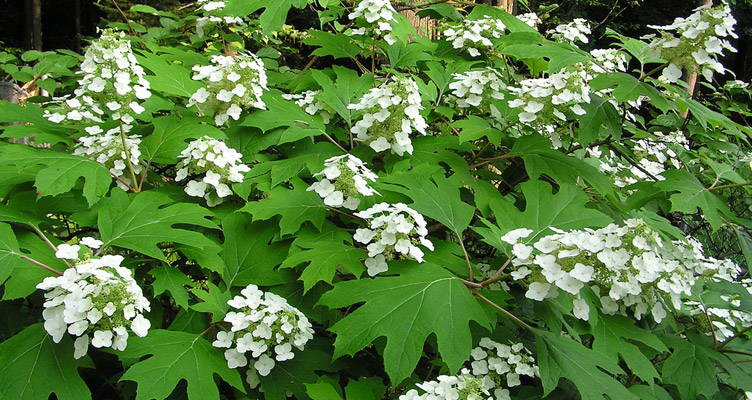 Oakleaf hydrangeas are deciduous flowering shrubs which are perfect for borders.

The flowers of oakleaf hydrangea (or hydrangea quercifolia) are produced on newly grown branches each year. These large cones of white flowers bloom in the summer, from July to September.

The name comes from the large, bright green oak-shaped leaves. In autumn, these leaves turn shades of coral, pink and red while the flowers fade to a pale pink and then brown.

These fully hardy hydrangeas should be positioned in full sun or partial shade, in moist, well-drained soil.

This hydrangea doesn’t require a lot of pruning but it should be trimmed at least once a year to keep it looking in good condition. Less pruning is actually better when it comes to oakleaf hydrangeas.

When to prune oakleaf hydrangea

You can prune your oakleaf hydrangea from late winter to early spring, although March tends to be the best time – particularly if you are trying to rejuvenate your hydrangea.

How to prune oakleaf hydrangea

You should start by removing faded flowerheads in spring after the frost. Cut back the flowered stems to a strong pair of buds and take out any diseased shoots.

If your oakleaf hydrangea has grown too big for your liking, or is becoming too woody, cut it right back. Make cuts at the base of each branch where it meets the main stalk – making sure you step back to keep an eye on the overall shape and prune from all sides to keep it balanced. It will regrow in the summer with new branches and then flower right away too.

Frost damaged, diseased or dead branches are best cut as far back to the healthy part of the branch, or main stem, as possible.

You can always snip off the overblown flowers on your oakleaf hydrangea in autumn and winter - just don’t prune when frost is forecast.

Take about one third off all branches and prune them back to about 50cm. Do this over the following three or four years until you’ve eventually cut back all of the branches to rejuvenate the whole bush.