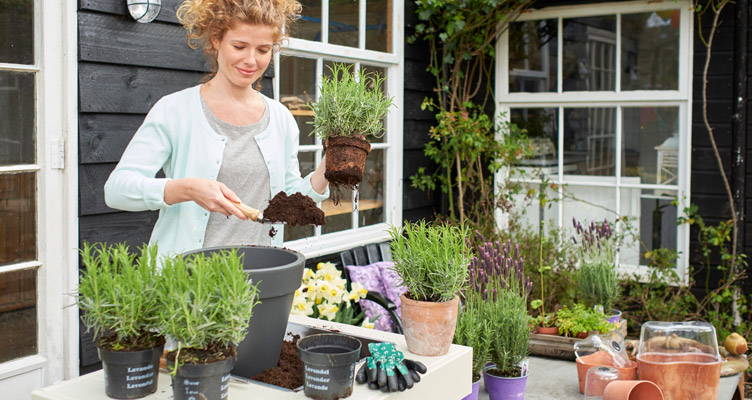 Lavender is a strong durable plant for dry, warm borders and known for flowering from spring right though to autumn. The toughest semi-shrub around, every sunny garden needs this heavenly scented staple. One of Europe’s favourite lavender is the ‘Munstead’; a semi-shrub attractive in pots or containers.

How to prune lavender

Not only is lavender incredibly versatile and low maintenance, lavender is easy to prune too! Start pruning after its first season in the soil. If you begin by pinching out the tips of the new growth when the plant is very young, it will respond by forming an aesthetically pleasing and easy to follow pruning shape with lots of blooming growth to work with later.

Using pruning shears cut back at least 1/3. The older the plants, the more vigorous you can be, however, don’t cut down to leafless wood. Give life to the lavender by pruning to the points just above the wood. When pruning well established lavender, cut just above the third node from the wood. This will revitalise existing nodes and they should then produce new stems. Make sure you always leave a few leaves on the branches, even if you want to prune back quite drastically. New branches do not develop readily on old wood.

When to prune lavender

The best time for pruning is once flowering is over but lavender, being the versatile plant it is, can be pruned as and when required. The flowers bloom on the maiden stems each year. This means that pruning can be done anytime from late autumn until early-spring without losing the flowering stems. Lavender in a sunny spot can triple in size each year.

The best time to prune lavender is in autumn. The main pruning can be done as soon as the plant has finished flowering. The autumn pruning should be done before the middle of October, as the branches that are now developing will bear the next season’s flowers. Timely pruning also reduces the risk of damage from an early night frost.
If you have enough space to let your lavender bush grow bigger, you could skip the main annual pruning for one year, although it is still a good idea to remove the dead flowers as this will encourage richer and prolonged flowering.

It is also possible to prune lavender in March if this is done very early, in the first half of the month. Any frozen branches can be cut off and the plant can be given a neat, compact shape. Make sure you always leave a few leaves on the branches, even if you want to prune back quite drastically. This ensures that new branches will develop. Never cut lavender back to the old wood, as this will prevent new branches from forming, and the flowers grow on branches that appear after the spring pruning. Don’t prune if a late frost is expected. Spring pruning instead of autumn pruning will delay flowering slightly.

When to cut back lavender

Cut back lavender after the flowers have finished preparing the plant for the cold winter months. The pruning reduces the plants size, weight, and density. If you decide not to prune, the plant will grow large and dense, forming areas that can collect water which could in time rot the plant, weaken or split the wood and collect snow, deforming the shape.

The other reason we prune lavender is to slow down the formation of the wood growing. We want to slow this process as lavender wood does not rejuvenate once pruned but simply dies. Old wood stops producing new shoot or will produce spaced-out shoots, making your plant look straggly and sparse. A good pruning twice a year will help slow down the formation of wood and extend lifetime of the plant.

English lavender is commonly grown in the UK and the hardiest lavender of all. It has pointed leaves and tight, upright spear-like flowers in midsummer. The flower is heavily scented.

You prune English lavender by cutting it back by two thirds in the late August. If necessary, you can cut into the wood. New shoots will quickly appear at the base of the plant. By pruning in the summer, the new shoots will have time to establish and become hardy before winter arrives. By pruning in August, your English lavender plant will remain in good shape for many years. A well-pruned plant can last for more than 25 years without becoming woody.

French lavender is less hardy than the English lavender and, therefore, you never cut back hard into the bare wood as it could quite easily kill the plant. Shape in late August, aiming for a rounded mound of foliage. Their winter silhouettes can make a huge contribution to the structure of your garden. French lavender has a much shorter life and only last for around five years.

Take lavender cuttings from all your varieties in July. Choose young three inch shoots that have just started to harden up. Trim them under the leaf, remove the lower leaves and place them into a 50% compost-and-horticultural-sand mix watering sparingly.

Lavender and roses, a winning combination

If you have planted the lavender to help your roses keep aphid free, a lesser prune can take place in April to delay the lavender flowering time.

Lavender – the illusion of France

The branches removed from your lavender plant can be put to use in several different ways. For instance, you could make lavender bags to place in drawers and cupboards to keep your clothes smelling nice and fresh. The branches cut off during the September pruning are ideal for this.

Not only does lavender provide a scent sensation but it also works as a visual treat. If you have an unsightly part of the garden or a chair that needs covering, why not try a painting of lavender, or a lavender cushion.