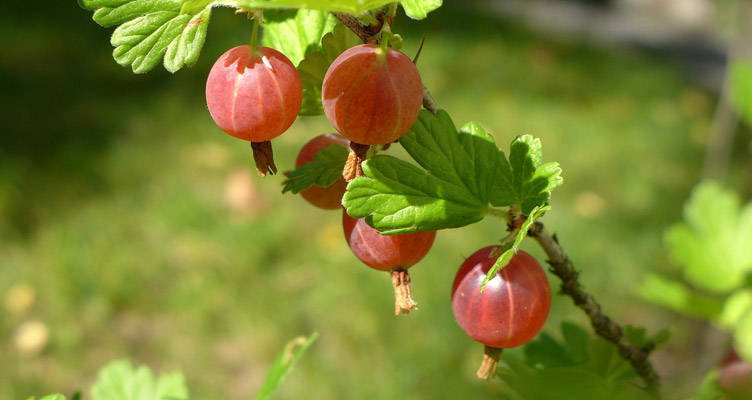 Pruning between January and March

Gooseberries can be pruned in the first year after planting. Remove all branches shorter than about 10 cm at the beginning of spring, in March. The remaining branches can then be cut back to about three quarters, always cutting down to an outward facing bud. If you have a pendulous variety, it is best to cut back to a bud that points upwards.

New shoots will appear from the pruned branches of the gooseberry in summer. These can in turn be pruned in the subsequent January-March period. Select a maximum of eight of these new shoots to become your main branches, or leaders. These should be divided evenly over the plant and should not grow inwards or cross other branches. Cut these branches back to about one quarter of the length, making sure that you cut down to an outward facing or upward facing bud. The shoots that have not been selected should be cut back to four buds.

The next summer new shoots and branches will develop on the bush. In the following pruning period (January – March), all shoots that have developed from the main branches during the previous growing season can be cut back to a length of about 8 cm. This creates fruiting spurs on the main branches that will produce fruit for the following harvest.

Once the bush has reached maturity, it should not be allowed to grow much larger. The main branches therefore need to be topped every year, removing about three to four buds.
If an older branch becomes less productive, it should preferably be replaced. This is done by cutting it back to a lateral and letting the lateral develop into a new leader.

Low-growing branches should also be removed. As the fruit ripens, these branches become heavier and may drag on the ground. This is not good for the fruit, and it also makes the bush vulnerable to damage.

The best time to prune is late winter or early spring, although you should beware of a severe frost just after pruning and you should never prune in freezing weather.

Gooseberries that are pruned badly or not at all may grow too big or become less productive, but apart from this they will not really suffer.

The gooseberry should be pruned after winter before the eyes/buds begin to develop shoots. Pruning enhances productivity and gives the bush an open structure, allowing sufficient light penetration. If a bush is too dense, the leaves and fruits are more vulnerable to mould, and this must be prevented at all costs.