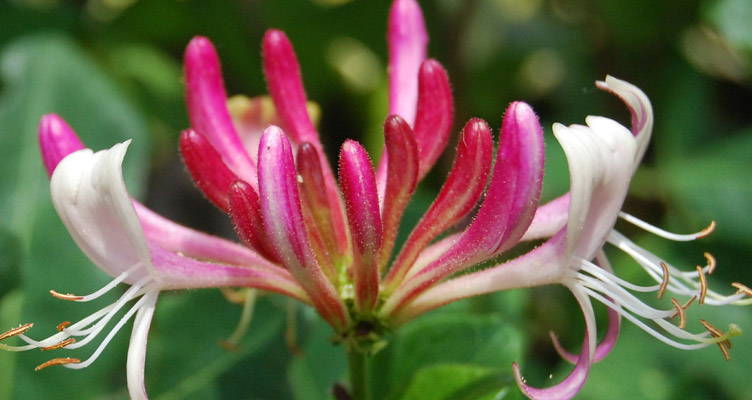 Honeysuckle (Lonicera) is a climbing shrub – more accurately a family of climbing shrubs – that is found in Europe, China, Asia and the United States, so it is very widespread. This climber is not self-clinging and has to wind itself around trees and shrubs, so it does not mind the shade.

There are many different varieties. They grow in any moist soil, preferring partial shade although they can also be planted in full shade. As climbing plants, they are attracted to the light. The woody stems can reach a length of several metres.

Honeysuckle has a delightful scent, especially the common honeysuckle (Lonicera Periclymenum). The scent is strongest in the evening, and on a warm summer evening you may smell them before you actually spot them. These plants attract nocturnal butterflies and other insects that are active in the evening. These insects ensure that the plants are pollinated.

The flowers of the honeysuckle have stemmed heads that are yellowish-white sometimes turning red or purple. The flowers are 4 to 5 cm in size and have two lips with a narrow tube at least 2 cm long. The upper lip and the lower lip curl back slightly during the flowering period. The flowers have long anthers hinged to the filaments, which protrude distinctively from the crown.

Lonicera Heckrottii. An extremely hardy variety from which ‘Goldflame’ is derived. This cultivar was imported to Europe from America in 1960 and has now become very popular.

Honeysuckle is a member of the Caprifoliaceae family, which is derived from the Latin words ‘caper’ meaning goat and ‘folium’ meaning leaf. The origin of the name Lonicera is uncertain. It is sometimes assumed that the botanist Linnaeus named the plant after Johann Lonitzer, a German doctor and natural historian (1499-1569). Another possibility is that he named Lonicera after Adam Lonicer, a doctor and nature expert from the same period, who wrote books including ‘Naturalis Historae Opus Novum’.

Medical specialists may be interested to learn that in Roman times honeysuckle was used to treat chest ailments and urinary tract infections.