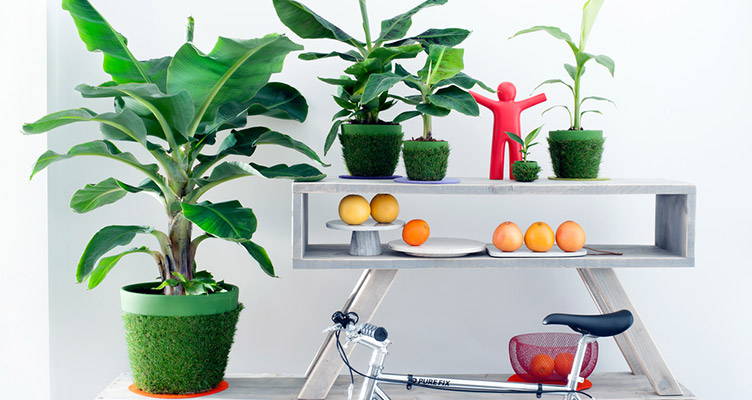 The ever popular banana plant really does add a lovely touch of the tropics to any living room as an indoor plant. Of course we are familiar with the banana plant (Musa) from sunny holidays in tropical climes. They grow wild all over in warm countries, from Tenerife to Indonesia and from Thailand to Mexico. A tropical banana plant looks great anywhere indoors too and likes a nice warm and sunny spot in your home. The banana plant can go outdoors on the patio or decking in spring and summer.

Caring for a banana plant

The large surface area of the leaves means that this plant loses moisture to the atmosphere. You need to water a banana plant regularly. Take care not to leave it standing in the wet as this can cause root rot.

A Banana Plant in Bloom

How about bringing your banana plant into flower? Stand the plant somewhere it can always stay and grow even bigger, with lots of light and high temps – a conservatory perhaps. The plant should flower and even produce fruit after 3 or 4 years.

Origins of the banana plant

Bananas originated in Eastern Asia and spread from there around the world, in countries along the equator. The first cultivated banana plants were actually around 8,000 BCE, in the Wahgi Valley on New Guinea. It was apparently Alexander the Great who brought the plants to the West, via India. Banana plants, with their large leaves, were originally used on plantations to shade coffee, cacao and pepper plants from the hottest rays of the sun. It was only latterly that they became prized for their fruit.

We do usually speak of a banana tree, but what looks like the trunk is really nothing more than winged, flattened leaf stems all one over the other that form the pseudo trunk of this perennial. The flowers develop on a thick stem that often has a purplish bract. The male flowers grow at the end of this overhanging flower stem. The female flowers are higher up the stem and these develop into bananas. As gravity makes the flower stem bend over the bananas want to grow towards the light, so the fruits take on a bent shape. A banana plant grown as a houseplant will not often grow any fruit. 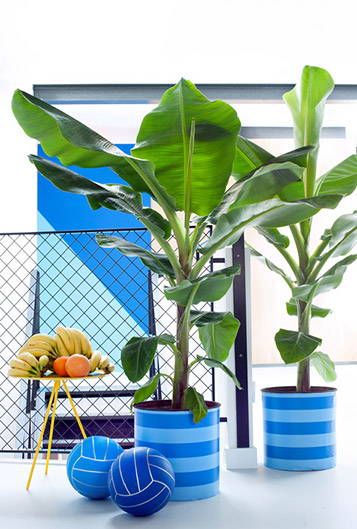 The banana plant is sold as a dwarf banana tree, making it more suitable as houseplant. All banana plants are characterised by their large, smooth, often somewhat wavy-edged foliage. You will sometimes observe darker markings on the leaves, making the plant even more decorative.