Herbs for Fragrance, Flavour and Decoration 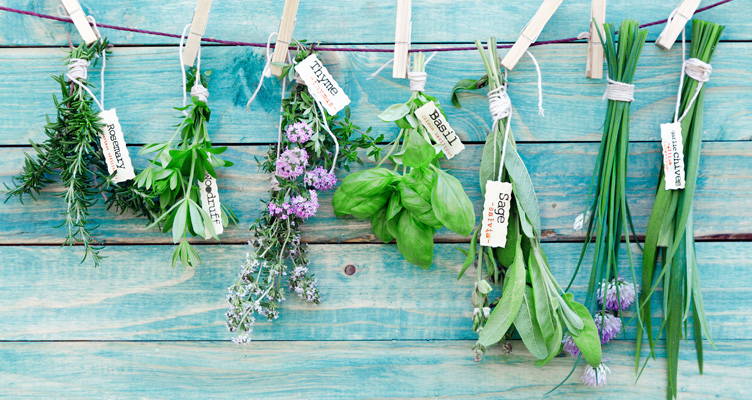 When we think of herbs and spices we usually think of the little jars in the kitchen. Historically speaking, many of these herbs were first used for medicinal rather than culinary purposes.

In the olden days, wise men and women with knowledge of herbs were held in high regard. For example, in Europe there were the Druids, who made herbal concoctions to cure certain ailments. Many of these cures have now been found to have a scientific basis, as these herbs contain active ingredients, although this could not have been known at the time. For instance, people carried bags of herbs to protect them from typhoid, and we now know that the antiseptic oils of certain herbs act as a bactericide.

Herbs have long played a role in religious ceremonies. The holy oil of unction contained myrrh and cinnamon among other things, and aloe was burned as incense. Spices like these were as valuable as gold in their day. It is therefore no surprise that herb traders were very powerful people, and many dramatic events occurred as a consequence of the herb and spice trade.

Subconsciously, man is still inclined to look for the solutions provided by Mother Nature. Almost all healing creams are enriched with aloe vera, and there is a herbal tea to treat most ailments. We are all taken with the mysterious power of herbs, but is this entirely due to their medicinal properties?

Do we solemnly believe in the healing powers of nature? Are we attracted by the enticing scents and decorative qualities of herbs? Or perhaps it is the delicious flavours? It is this versatility that makes herbs so desirable.

Lavender (Lavandula) was used as a medicine by the ancient Greeks and Romans, as the ethereal oils have a calming effect on the central nervous system. It was also thought that bunches of dried lavender could keep diseases like the plague at bay. According to legend, mediaeval glove-makers in the French village of Grasse were protected from the ‘black death’ because the delicate leather they used to make the gloves was scented with lavender oil. The villagers immediately made the link with lavender, and consequently people in the affected areas carried bunches of dried lavender between their clothes.

Lavender is one of the few plants with a preference for dry, sunny conditions and poor soil. It is often planted in groups, in a bed or to frame a border. The evergreen bushes provide structure to the winter garden.

Lavandula Angustifolia is the most common lavender variety in Northern Europe. It is a winter-hardy evergreen perennial, with purplish-blue flower spikes and thin greyish-green leaves with a distinctive fragrance.

Both flowers and leaves can be used in salads, dressings and desserts with ice-cream or fruit. They can also be added to wine, vinegar and aspic, although this use is less common.
The flavour of the leaves goes very well with lamb, whereas the flowers can be sugared and used in cakes. However, both leaves and flowers should be used sparingly.

Lavender is also famous for its aromatic properties. The flowers can be dried on a tray or hung upside down in bunches. The dried flowers can then be made into lavender bags for placing in the linen drawer or airing cupboard. This not only gives a pleasant smell, it also deters moths!

Finally this herb is a source of ethereal oil, which has healing properties and relieves stings, burns and cuts. It also deters flies and gnats. A few drops of lavender oil on the pillow or a cup of lavender flower tea helps to give a good night’s sleep.

Research has shown that thyme has a powerful antiseptic effect, killing bacilli in just forty seconds. The Egyptians discovered this many centuries ago, and used thyme to embalm their dead. The ancient Greeks burned the herb as an aromatic incense. The Greek word 'thumon' means to burn a sacrifice.

Thyme has many more properties. It acts as a tonic and a stimulant, and is therefore recommended for breathing problems, poor blood circulation and poor digestion. A thyme infusion provides relief for headaches, nervousness, coughs and flu.

In cooking, thyme should be used sparingly as the flavour can be rather overpowering. Thyme goes well with sausages, meat dishes, wine stews, tomatoes, salads and cooked fish. A mixture of thyme and savory is an excellent alternative to pepper.

Last but not least, thyme is a delightfully fragrant garden and balcony plant that flowers all summer long. The bush reaches a height of around 30 cm. It is an attractive ground cover with bushy growth, becoming even denser if cut regularly. It has slender, evergreen leaves and little purple flowers. Thyme is an undemanding, low-maintenance plant that grows in any soil, likes sun and warmth and does not need much water. Bakker offers the excellent variety Thymus Serpyllum, which forms a lush green carpet in the garden.

Of course, herbs are also prized for their culinary qualities. Here are some of the herbs that are most commonly used in the kitchen.

the cool, pungent taste of mint is unmistakable. Mint contains the powerful aromatic substance menthol, which has an exquisite smell. Mint tastes excellent in combination with lamb.

the shiny green leaves have a strong aroma and can be used either fresh or dried. Freshly cut leaves can be frozen in small quantities. The flowers should be cut off. This gives the plant a bushier growth and improves the flavour of the leaves, which have a slightly bitter taste. A combination of rosemary, sage and basil forms a good basis for salads, vegetable soup and pasta sauce.

sage is used mainly in sauces and in dishes with fatty ingredients such as pork, mutton or duck. It also tastes good with oily fish, and in herb vinegar and herb oil.

this is another versatile herb. In cooking a distinction is made between the leaves and the flowers. The flowers can be added to salads, or mixed with sugar and cream and stirred through puréed fruit for a delicious treat. The leaves are tasty with meat dishes and roast potatoes. They also form an essential ingredient in tomato sauce for pasta.

this herb has a mild onion flavour. It is rich in vitamins A and B and especially C. The herb loses some of its strength if the flowers are left on the plant. The finely chopped leaves are tasty in salads, ragouts, sauces and dressings, although the flavour is lost during cooking. Dried chives also have less flavour than fresh. Chives can be frozen in a plastic bag.

There are many, many more herbs that can be used to turn a simple meal into a culinary delight. For instance, we have garden cress, dill, parsley, yellow mustard and savory. Each herb has its own very distinctive character.

Herbs are essential ingredients in today’s kitchens. The nicest thing about herbs is that they can be grown almost anywhere – in pots on the balcony, on the kitchen table, in a herb garden or simply between ornamental plants in the border.

Check out our collection Herbs
Trustpilot