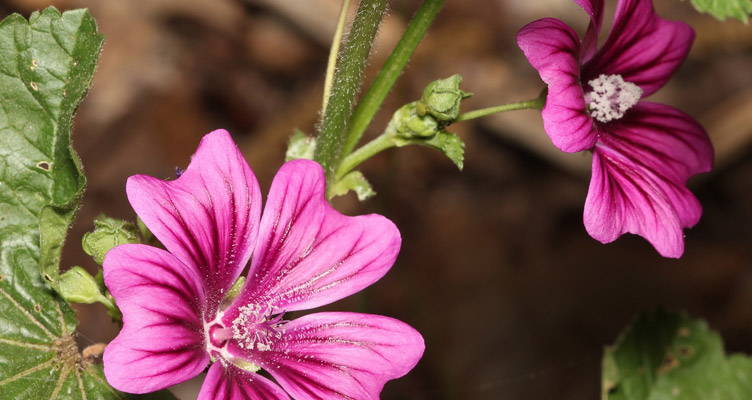 Malva, or Mallow, looks wonderful in the summer border. For three entire months you can enjoy the large, refined flowers in romantic shades that can reach up to 5cm across.

Mallow is a fabulous border plant because of its endless funnel-shaped flowers, which are delicate and striking at the same time. With its five petals folded up in the bud, Mallow adds colour to the border from June through to August. Certain types even flower on to September. Malva sylvestris 'Zebina' is a beautiful variety. This bushy plant has deep pink flowers with pastel pink edges. The lobed, serrated foliage is an extra asset.

Mallow likes a well-drained soil, even slightly dry and poor. An ideal place is the back of a sunny border. It usually grows to perhaps 60-100cm tall but some species, like Malva sylvestris, can reach a height of 150cm. In winter Mallow should never be in waterlogged or wet soil. Another problem that Mallow might suffer is rust. This is a fungal infection that causes brown yellow clusters of spores on the leaves. Do not let this put you off purchasing the plant for your garden however, as this disease is not that common and can be treated with a biological fungicide.
Try planting Mallow in groups of three for the most striking effect in your border.

The best time for planting Mallow is between mid-March and May. Some suggest that Mallow can also be planted between October and March but if there is a risk of severe frost in your area, the plant could easily freeze to death! Planting is possible from mid-August to late-September, but spring is definitely the best possible time.

All types of Mallow are more or less sensitive to frost. Protect the plants in autumn with a layer of straw or leaf mould. Stalks with overblown flowers should be removed. They can be cut under the lowest leaves. This will stimulate continuous flowering.

The prettiest varieties and colours