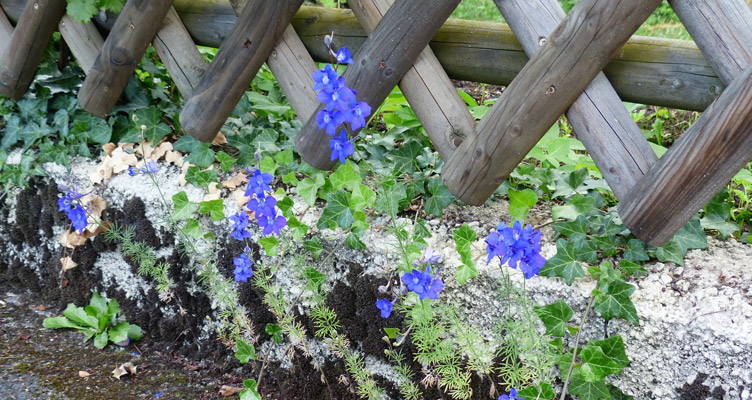 Flowering delphiniums are spectacular garden subjects with their magnificent long spikes. The name Delphinium is derived from the Latin word for dolphin, as the shape of the buds is vaguely reminiscent of a dolphin.

The delphinium is a member of the Ranunculaceae family. There are around 250 different sorts, which is partly due to the many breeders who have improved the plant over the last hundred years, allowing us to enjoy this exceptional plant in Northern Europe today.

When I tried to unravel the history of this plant, I came across various sagas, myths and legends. My imagination was captured by a Roman legend, which fits in with the above explanation of the name. As the story goes, a man claimed to have been rescued miraculously by a dolphin. When his friends tried to find the creature, the man warned it off, but his efforts failed. Neptune then saved the dolphin by turning it into a flower: the Delphinium.

Of course, the actual history is quite different, and the leading roles are played by discoverers and breeders. Famous names of men who hybridized this hardy plant over the years include Victor Lemoine, James Kelway, Blackmore and Langdon, Watkin Samuel, Frank Bishop, Karl Foerster, Frank Reinelt, Charles Barber and B. Ruys.

In the wild, delphiniums are found mainly in the northern hemisphere. Some sorts can be found growing at high altitudes in parts of Africa. This wild variety is also known as ‘Delphinium consolida’, which refers to its ability to heal wounds (consolidate). Delphinium is used for various medicinal purposes, which is quite bizarre if you consider that the leaves and the seeds are poisonous. (NB This only applies if the plant is eaten, by pets, for example.)

In Europe the main parent plant of the hybrids is the large-flowered ‘Delphinium elatum’, although ‘D. Formosanum’ and ‘D. Grandiflorum’ were also widely used for hybrid development. Experiments to obtain good hybrids were conducted primarily in England, Germany and the Netherlands.

The delphinium hybrids can be divided into three groups:

The most common colours for delphiniums are purple, white and blue. They flower from June to August. They may flower a second time if they receive sufficient water, fertilizer and sun. After the first flowering, cut the stems down to five to ten centimetres above the ground. New stems will then develop automatically, producing radiant flowers. As these plants can become very large, they should be supported with canes so that they stand tall above the other plants in the border!