Take a trip around the world

Have you ever stopped to wonder where all of your indoor plants actually come from? Let us tell you. This travel guide for indoor plants takes you on a trip to see the most amazing plants in North and South America, Africa, Asia and Oceania. So, now you will know exactly where all of this beauty originated. Do you want to join us on an adventure?

The most amazing plants from North and South America

Meet the world-famous Monstera, the perfect indoor plant. Famous for its large, bold leaves with beautiful holes. As a bonus, the plant also purifies the air. The Monstera was originally discovered in South America, where it grows as a climbing plant in the rainforest. Give the Monstera a tall tree or rock and it will grow upwards for a few metres. You will also witness the Monstera rapidly growing in height in your living room. 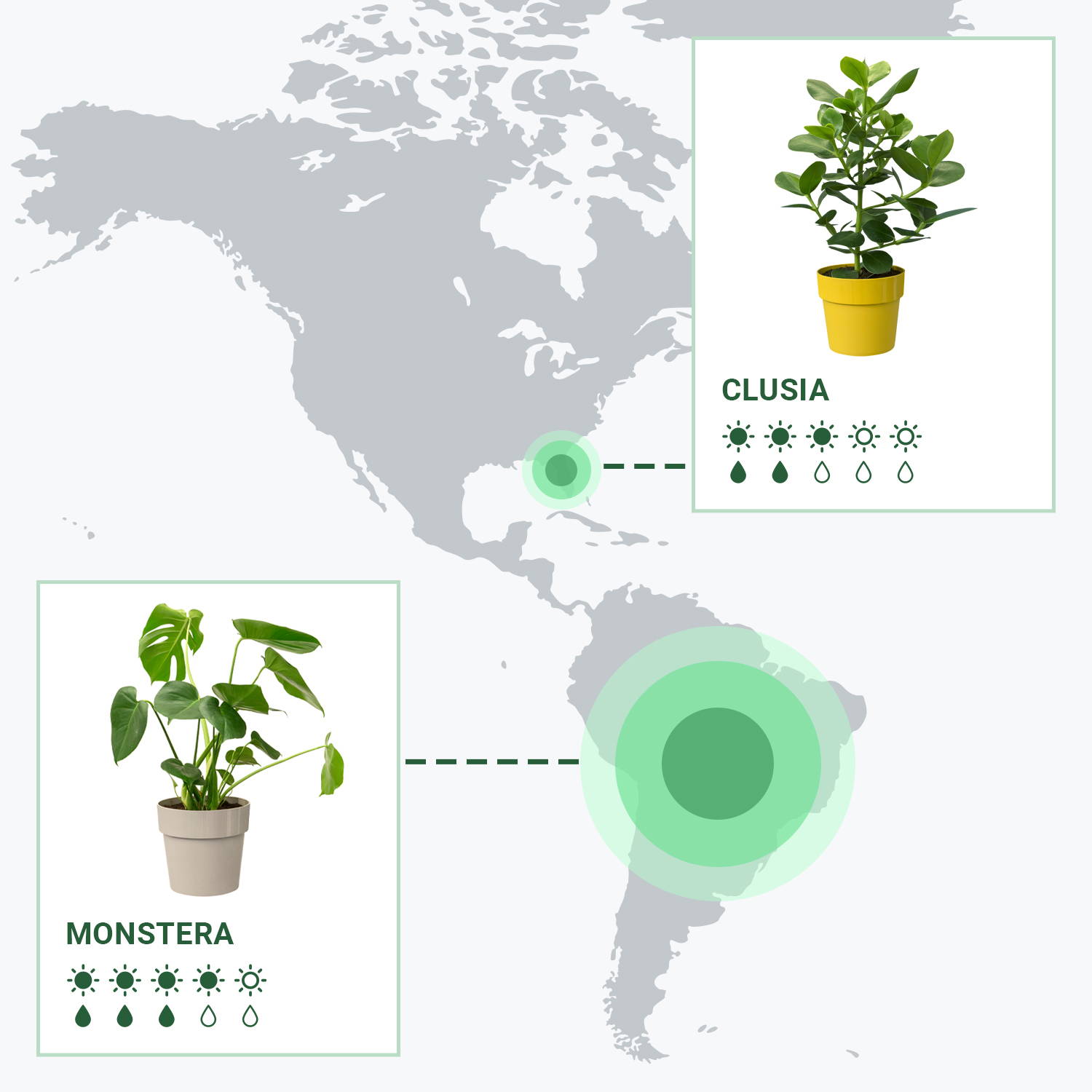 Clusia (Florida and the Caribbean)

The stunning, sturdy Clusia is native to the Caribbean and Florida. The Clusia is strong and can thrive in almost all conditions. That is why this plant can be found in a variety of places, including tropical forests, volcanic landscapes and wetlands. In the Caribbean, the Clusia grows all around the islands, but particularly on other plants and trees. For this reason, the Clusia is considered a weed on a number of islands. That's not the case in the UK; we love the Clusia because of its big, glossy, deep green leaves. The Clusia is also becoming more and more popular. This is mainly due to its air-purifying properties. What's more, the plant looks even more stunning in water.

The most amazing plants from Africa 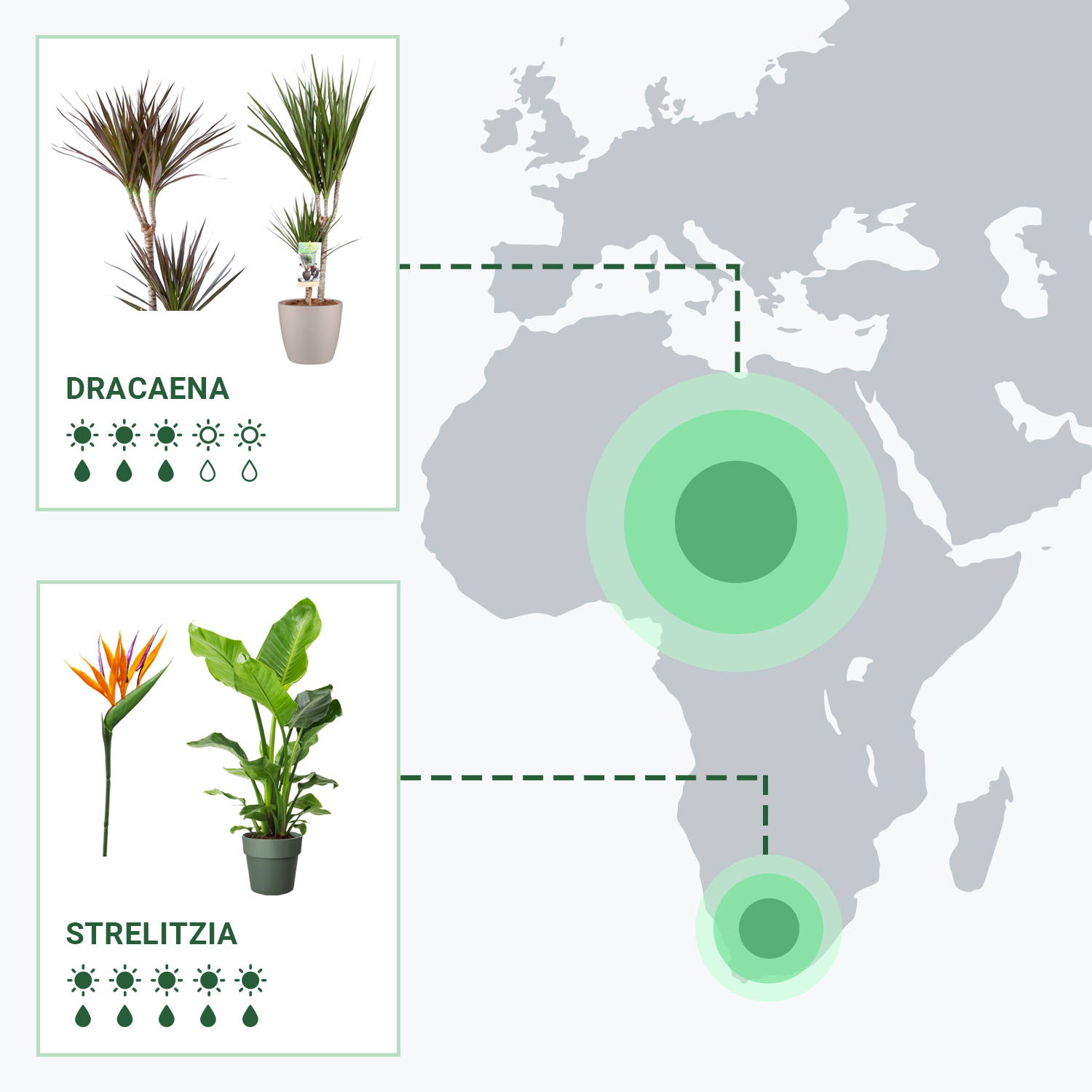 The Dracaena is a beautiful, air-purifying and exotic plant from the rainforests of Africa. You will also frequently come across this plant in Asia and Central America. There are dozens of different types of Dracaena. The Dracaena is also known as the 'dragon tree' or 'dragon's blood tree'. Its nickname is inspired by the resin in the Dracaena Draco, which is rumoured to be red from the 'dragon's blood'. The Dracaena often has several stems with strong, tough spikes. The Dragon Tree can live to a grand old age and will add a rugged and wild touch to your living room.

The impressive Strelitzia can be identified by its large, dark green leaves and it is an authentic jungle plant. It is extremely popular in the UK thanks to its tropical looks. The Strelitzia can grow to a height of up to ten metres in the African jungle. Here in the UK, we are fans of the small variant, although we are increasingly seeing the large three-metre Strelitzia used as a centrepiece in living rooms. The Strelitzia is also known as the 'bird of paradise plant' thanks to the orange and blue flowers that can blossom on the Strelitzia reginae. This doesn't happen often, but you may be rewarded with a stunning flower if you take good care of it.

This is the Zamioculcas, or zammy to its close friends. This tough plant comes from Tanzania and grows best in tropical forests or in subtropical savannahs. Zammy is renowned for its sturdy leaves and sturdy stems. The plant retains water in the stems. It is one of the easiest indoor plants to look after; you don't need green fingers to care for this plant, making it a robust, sturdy plant to suit everyone.

The Areca Palm comes from Madagascar, where it can be found mainly in the sand dunes and beautiful beaches. Can you picture the scene? You won't be able to spot the Areca so quickly in other regions. It is categorised as 'Near Threatened' on the Red List. This is because it is being illegally cut down. The beautiful palm (legally) brightens many UK living rooms and instantly creates a tropical vibe. Another little fun fact: the Areca Palm purifies the air! The beautiful leaves capture impurities in the air and convert them into oxygen 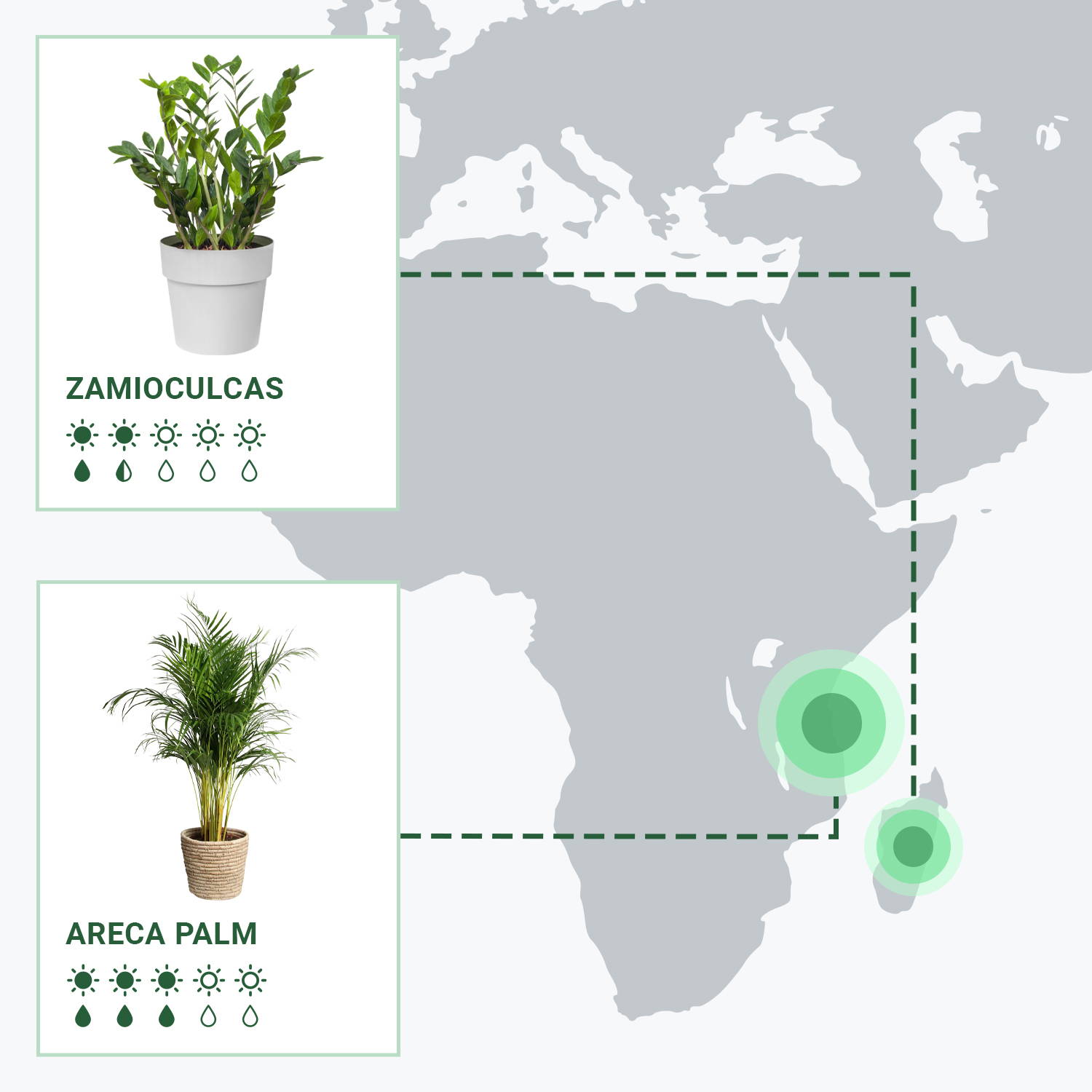 The most amazing plants from Asia

It may surprise you, but the Musa is native to South-East Asia. Thanks to its unique selling point — the banana — the Musa can now also be found in many tropical regions. When you bring the Musa home, you add a truly exotic touch to your house. The Musa is known for its big, green leaves. The plant can grow to a height of up to 20 metres in the tropics. We stick to the dwarf variety in our living rooms. Unfortunately it doesn't produce any bananas, but that doesn't make it any less beautiful. 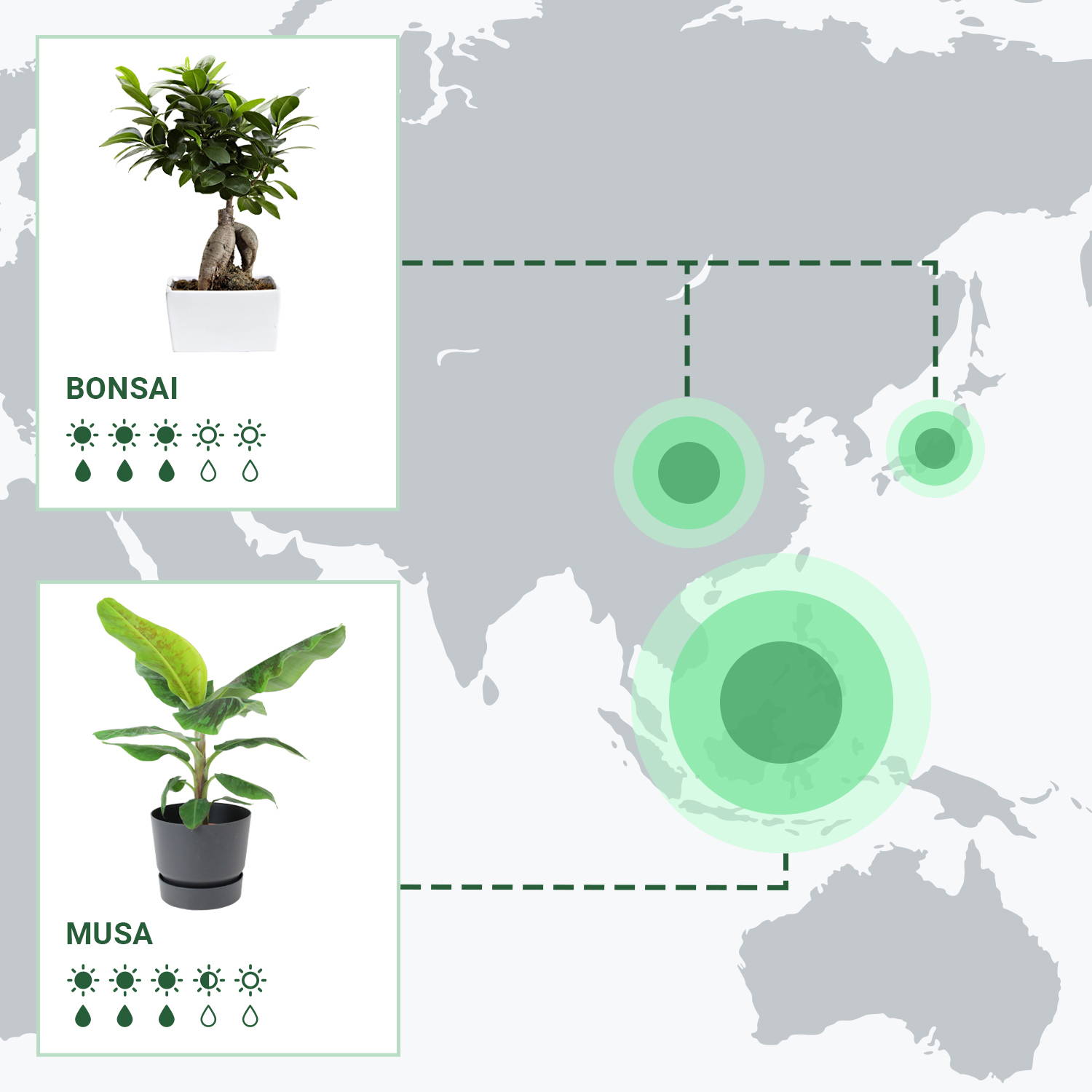 The Bonsai is native to China. This is where the art of pruning miniature trees originated. This art was then adopted by the Japanese and refined in Japan. Bonsai is made up of two separate words, 'bon' and 'sai', and its literal translation means 'plant in a tray'. Over time, the Bonsai has also become all the rage in Europe and it makes a real centrepiece in the home thanks to its quirky, artistic stem.

The most amazing plants from Oceania 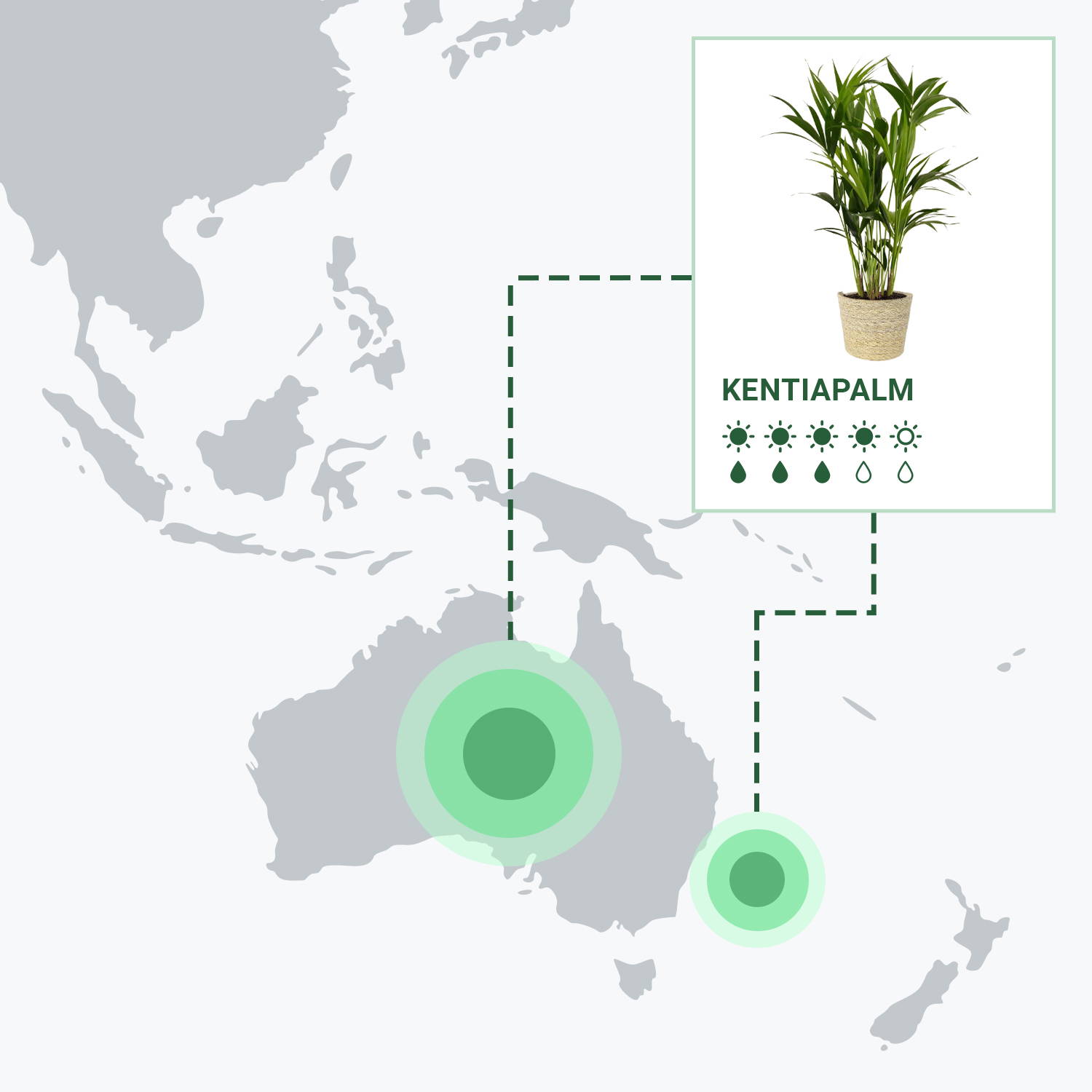 This is another stunning, exotic palm, which is native to Lord Howe Island in eastern Australia. This relatively unknown island is very isolated and that's why this beautiful palm has remained a closely guarded secret for so long. The Kentia palm is known as one of the stronger palm trees. On Lord Howe Island, the plant prefers to grow beneath the leaves of larger trees. In the wild, the Kentia palm can grow to a height of up to 20 metres. The seeds of the Kentia palm are imported from Lord Howe Island so that we can enjoy the plants in our living rooms.

Not ready to stop travelling?

Then why not read our blog? We will take you on an adventure based on different plants. We also share tips on how you can transform your house and garden to match the style of your favourite part of the world.