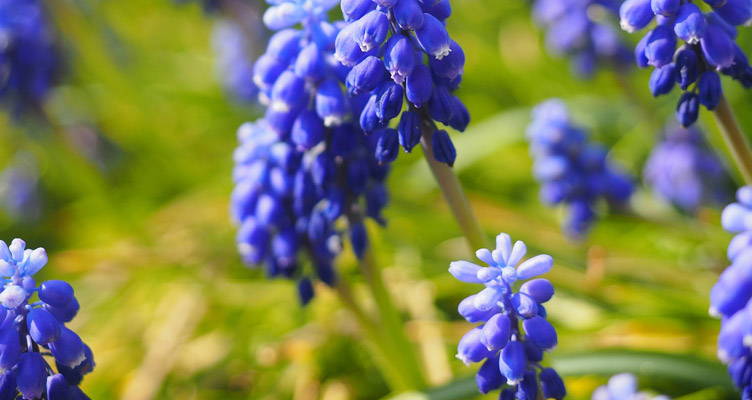 Another early flowering bulb is Muscari: purple grapes or grape hyacinths. Their biggest attraction is their bright blue colour, which is so rare among the spring bulbs. Most of them also generate a delicious scent. These flowers are native to Southern-Europe, North Africa and West-Asia.

There are many different varieties, which will form a beautiful addition to any garden, either individually or in combinations. Try, for example, a mixture of Muscari latifolium and M. 'Valerie Finnis' or M. armeniacum and M. botryoides 'Album'.

Muscari will thrive in any soil type, but need a lot of warmth. Only then, they will return in greater number every year. They easily reproduce underground if they receive a lot of sunlight, and also spread well. The flowering period reaches its peak in April, which makes them ideal for planting between later blooming, low perennials. Muscari also do very well in pots: who wouldn't want such a lovely, aromatic blue plant by the front door?