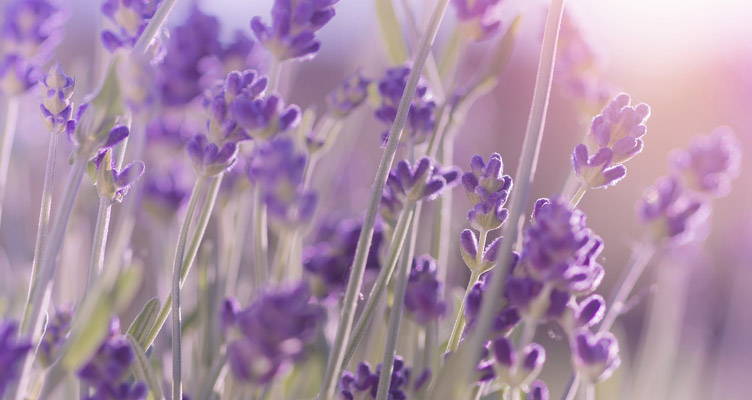 Lavender is a herbaceous plant that becomes slightly woody at the base of the branches and is therefore classified as a semi-shrub by botanists. The genus Lavandula comprises approximately 25 species and belongs to the Lamiaceae family, the labiates. The name Lavandula is derived from the Latin word ‘lavare’, which means to wash and/or to clean. Lavender has been used since time immemorial to perfume bath water, and was also grown by the ancient Greeks and Romans for the essential oils obtained from the flowers.

The common lavender is Lavandula angustifolia. This plant forms an attractive combination with roses and protects them from aphids at the same time.

Lavender also deters ants, but it attracts butterflies. Cabbage whites are especially fond of lavender. As the large cabbage white can cause substantial damage to cabbage patches, it is probably not a good idea to plant lavender near a vegetable garden.

Lavender is especially suited to dry, humous soil, and it needs plenty of sunshine in order to flower richly. The bushes should be planted at a distance of thirty centimetres from one another. This is also a suitable distance for planting lavender as a hedge. Lavender reaches a height of seventy to ninety centimetres and a width of up to fifty centimetres. The lanceolate leaves are pruinoise and greyish-green in colour. When they are rubbed, the gentle, sweet aroma is released. Lavender is an excellent ingredient for a herbal pot-pourri, and lavender bags give off a pleasant fragrance in linen cupboards and under pillows. The flowers grow on long stems that stand above the rest of the bush. They develop in spikes five to eight centimetres long and the flowerets open from bottom to top.

The waving fields of lavender in Provence in France are a wonder to behold with their magnificent purple flowers and exquisite scent. You can reproduce this on a small scale in your own garden or on your balcony. Plant this little shrub close to the patio or in a pot next to a garden seat and enjoy the delightful sweet scent every day in summer.

The ancient Romans and Greeks also used lavender for medicinal purposes, as the essential oils have a calming effect on the central nervous system. It was once believed that bunches of dried lavender could ward off diseases such as the plague. According to legend, the medieval glove-makers in the French village of Grasse escaped the Black Death due to the fact that they perfumed their fine leather with lavender oil. The villagers immediately made the connection with the use of lavender, and many people in the affected regions subsequently wore bunches of dried lavender among their clothes.

Lavender (Lavandula) originates from the Mediterranean region, although it has been grown for centuries in more northern gardens. However, you are unlikely to come across the common variety in the lavender fields of France. There they grow a hybrid that has a higher oil yield. In French this is called 'lavandin' instead of 'lavande' (common lavender).

If the plant is pruned effectively from the first year onwards, this will encourage a bushy growing habit with good low branching, resulting in an attractive rounded bush or dense hedge.

The main pruning is done in late March or early April after the severe winter frosts have ended. About one third of the plant should be removed. Make sure that some leaves are left on the branches, otherwise the plant will not form new shoots. If the plant is pruned back down to old wood with no dormant buds, the new shoots will not be able to develop. Only prune drastically if you can see new shoots developing on the branches below the cut.

If the plant is not pruned for several years in succession, it will eventually have long, ugly, bare stems with just a few leaves at the top. The summer pruning should be done at the end of the flowering period. This can range from July to September. Harvest lavender early in the morning, cutting stems in full bloom to ten centimetres below the flowers and hanging them up to dry in a dry spot out of the sun.

If you are reluctant to spoil the appearance of your flowering lavender and are hesitant to prune, you could cut the flowering stems and tops directly after flowering. This allows the plant to grow a bit more before winter. Lavender is not a very easy border plant, as it likes a dry, very sunny spot and poor soil. The sunnier the position, the more intensive the colour of the flowers. There are around 25 different lavender varieties, the most hardy of which is Lavandula angustifolia ‘Munstead’. If the plant does not get enough light or is given too much fertilizer, it will become limp and wilted. Furthermore the soil must not be too damp, especially in winter. The drainage properties of heavy clay soil can be improved by adding coarse sand. Remember that lavender can withstand frost and rain far better in poor soil than in fertile soil.

Lavender is often planted close to roses. The purplish-blue harmonizes beautifully with the pastel colours of roses. The rose benefits the most from this partnership as lavender deters aphids. On the contrary, the fact that roses need large quantities of fertilizer is not ideal for lavender.

Lavender generates a Mediterranean ambience, especially when combined with other plants that like sunny conditions such as phlox, sneezewort and low carnations. These are also good companions as their pink and lilac colours harmonize well with lavender. For a very special feature, a bed framed in lavender and filled with flowering lavatera is breathtakingly beautiful.

If you like blue and lilac shades, you should check out our purple border package, where lavender is combined with Alliums and Salvia. Another option is to combine different iris varieties with orange hawkweed and purple lavender.

Check out our collection Garden Plants